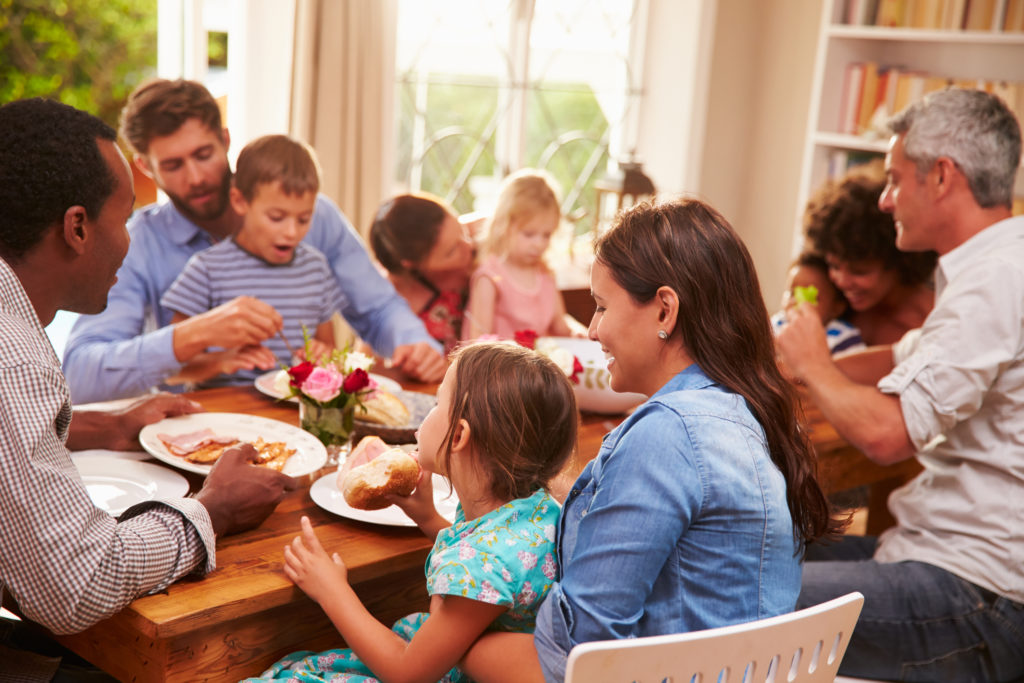 There’s a word for what happens when we go home for the holidays. Revertigo. Dr. Dan Gottlieb, host of WHYY Philadelphia’s Voices in the Family, recalls watching his wife experience “revertigo”: “When we left… she was a wife, a mother, a wonderful woman—and she gets home, and with her family, and she’s an obedient little girl without a voice.”

Sound familiar? On an episode of Voices in the Family dedicated to surviving the holidays, Gottlieb’s guest Elizabeth Scott noted how often, when people go home, they revert to the roles they had when they were teenagers or even younger.

It’s easy to just pick up the same script and transform from an accomplished business leader into a ten-year-old who just wants mom and dad to turn off the TV and pay attention. When we go home, says Gottlieb, we lose decades of our emotional development!

And you’re not the only one who’s comfortable slipping into that role. A family is a whole system, explains Scott, and that system often works hard to keep everybody behaving in the usual, comfortable ways that—for better or worse—everybody knows how to respond to.

Revertigo can cause a lot of stress. You feel frustrated with yourself, asking, “Am I going crazy? Why am I going off in a huff like I did when I was fourteen?”

And things are no better for your spouse, who can’t help wondering, “What happened to the grownup I married?” And if you try to challenge the prescribed patterns, watch out! Then it’s your family who starts to question, “Who is this person? Why isn’t she reacting the way we expect?”

This is only one of the many factors that can cause holiday angst.

Last year, Healthline reported that out of over 2,000 people surveyed, only 10% felt no stress at all during the holidays. If you’re in that 90% that feel pretty stressed right about now, we at the Leadership Story Lab have some good news for you. There is a way to beat holiday stress.

That’s right. Remind yourself of the stories of your past. While “revertigo” drags you back into the past in an automatic, unreflective way—so that you unwittingly sacrifice decades of growth as a human being—reminiscing reminds you of the person you used to be while also letting you maintain a sense of who you have become.

Not only does a trip down memory lane help you keep your past and current “selves” in perspective, it also does wonders for your brain. “Reminiscing can help boost the production of the neurotransmitter serotonin,” says Alex Korb, neuroscientist, postdoctoral researcher at UCLA. Serotonin, in turn, increases positive feelings. Research from Loyola University uncovered a similar finding: 20 minutes of reminiscing each day cheered people up. And if your stress stems from loneliness—whether you feel lonely in a crowd or physically alone—nostalgia is a good way to fight those overwhelming waves of isolation.

“Nostalgia counteracts loneliness by reminding you that you have social support,” according to a 2008 study published in Psychological Science.

Nostalgia, the study’s four researchers found, is a “psychological resource that protects and fosters mental health.” Loyola professor Fred Bryant adds that reminiscence can give you “a sense of being rooted, a sense of meaning and purpose—instead of being blown around by the whims of everyday life.”

But, as sweet as it can be to remember the past, it can also be painful. Who hasn’t dredged up some regrets while reminiscing—or noticed some stray tears while thinking of people we miss?

It’s important to distinguish between healthy reminiscence—which boosts your mood—versus depressive ruminating—which gets you stuck in repetitive negative thoughts.

Once we’re wallowing in a depressed mood, we stop taking actions that could cheer us up. Being specific about your memories is one way to reminisce rather than ruminating, as University of New Brunswick psychology professor emeritus David A. Clark points out in his book Mood Repair Toolkit.

When we’re depressed, our memories tend to be less specific. We think, “sure, cookie exchanges are fun,” instead of “the cookie exchange among my neighbors on Friday was fun.” The specific memory of exchanging cookies, sipping tea and joking with neighbors is the one that will lift your mood—it contains specific sensory details that help you experience the event all over again. And the even better news is that usually, thinking about one positive memory will lead you to other positive memories.

So challenge your generalizations. If you find yourself rolling your eyes, muttering about how “Christmas at Aunt Martha’s is always rotten,” Clark recommends trying to imagine past events like this in detail—making yourself include the positive moments instead of painting everything with gloom.

Sonja Lyubomirsky, a psychologist at the University of California at Riverside, adds that it’s important to keep the right perspective while reminiscing. “Do you focus on how positive it was then, or that it’s over now?”

But the main thing is not to be scared of being a little nostalgic.

“When you’re nostalgic about something, there’s a little bit of a sense of loss—[the moment has] happened, it’s gone—but usually the net result is happiness,” says, social psychologist Clay Routledge of North Dakota State University, who has spent a decade studying the phenomenon.

1. Bring out the photo albums

Spend time, alone or with a loved one, paging through old photo albums. Or spend time collecting and organizing more recent photos of travels or special events. Pause to think of the stories related to the photos. Refuse to generalize. Think of the positive, specific details of each story.

My friend’s grandma would bake macaroni and cheese for lunches time after time when my friend and her family would visit her retirement home. Now, whenever my friend eats macaroni and cheese, she can’t help remembering her grandmother, who passed away eight years ago. She still has the recipe for Grandma’s Mac ‘n’ Cheese, made with bracingly sharp cheddar. Revisiting the recipe would connect her with very specific sensory details. Making recipes from relatives and friends is a great way to begin reminiscing about times spent with them, as your process of preparing the meal mirrors the steps they have gone through.

Another friend of mine says that every couple of months, he gets the urge to look up 80s cartoon theme songs or toy commercials on YouTube and share them with his wife. Usually there’s a burst of “Oh, yeah! This show!” Or his wife will shout, “Whoa! Popples! I completely forgot about those!” It’s silly, but he and his wife end up learning more about each other, and the visuals from years gone by trigger laughter and stories about childhood.

A Habit of Reminiscing

Reminiscing—the kind that does boost your mood— can take practice. “It needs to become almost habitual,” says Fred Bryant, “spending time daily or weekly looking back on those moments. If you create a routine it may eventually become automatic.”

No matter what, it’s an important tool for combatting the stress of “revertigo” and other holiday madness—and it’ll remind you to spend time building positive memories amidst the chaos.